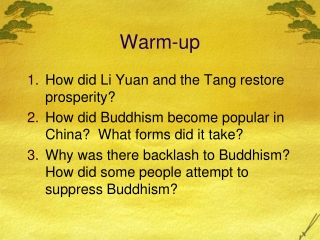 Warm-up. How did Li Yuan and the Tang restore prosperity? How did Buddhism become popular in China? What forms did it take? Why was there backlash to Buddhism? How did some people attempt to suppress Buddhism?. REUNIFICATION AND RENAISSANCE IN CHINESE CIVILIZATION.