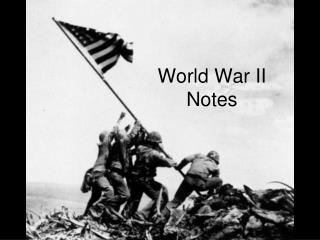 World War II Notes. What was WWII?. Largest war in human history. Involved countries, colonies, and territories around the entire world. By the end, over 70 million were dead. It lasted from 1939 until 1945. Causes. W WI and the Treaty of Versailles. A ppeasement.

World War I Notes - . a lliances – agreements between nations to provide aid and protect on another. causes of wwi –

Essential Question : What caused World War II? - What were the major events during world war ii from 1939 to 1942? cpwh

World War II Begins - . rise of dictators. leaders get power by playing on anger at end of wwi and versailles italy :

Why the Treaty of Versailles led to World War II - . causes of world war ii by dylan green. the signing of the treaty of

World War II - . unit 8. hook: causes of war. how do you think the end of wwi led to wwii?. the war in europe. wwii began