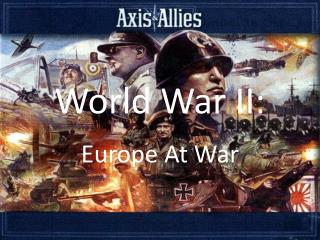 Lead up to World War II - . chapter 23. why did totalitarian states rise after world war i, and what did they do? . world

WORLD WAR II - . the second world war started in 1939,when germany invaded poland. then lots of countries joined together

World War II - . what was happening when. war begins in europe. in europe, poland became hitler’s next target… france

World War II - . a timeline of events. timeline. 1922 – mussolini becomes dictator in italy. he is known as “il