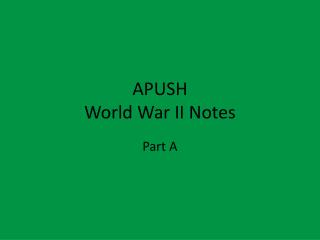 APUSH Review: The Presidency of Dwight “Ike” Eisenhower - Www.apushreview.com. everything you need to k now a bout

Choices facing the United States during the Cold War - . bell work: 5/4/09. what constitutes a threat to you?. in-class

Essential Question : What caused World War II? - What were the major events during world war ii from 1939 to 1942? cpwh

Consequences of the First World War for Germany - . germany 1918-1933. the situation. the kaiser has abdicated and left

The End of the War: Treaty of Versailles - . paris peace conference. britain, france, italy, and the united states meet

World War II – War in Europe - . battle of the atlantic. hitler order the use of submarines against american ships in

Hitler the Orator - . http://www.youtube.com/watch?v=syi_b8a5iv4. a public speaker, especially one of great

From Appeasement To War - . 14.1 notes. i. aggression goes unchecked. japan overruns manchuria league of nations does