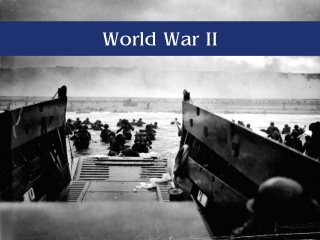 World War II. In what ways did the peace settlement with Germany at the end of World War I make a new world war with Germany more likely?   How was Hitler able to rise from obscurity and lead millions of Germans to embrace the extreme and violent ideas of the Nazi Party? World War II - . part one. essential questions : what caused world war ii? what were the major events during world