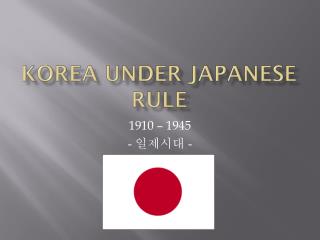 Korea under Japanese rule. 1910 – 1945 - 일제시대 -. Pre-event. Since 1897, The Korean Peninsula was ruled by emperor Gojong and his empress Queen Min. The peninsula was called the Greater Korean Empire. Pre-event.

Korea falls under Japanese rule - . oct. 4, 2012. review. what role did china play in korea in the last quarter of the

Japanese Imperialism And the Encounter with Korea - . february 6, 2014. review. what was the meiji restoration? how did

Korea and Taiwan Under Japanese rule - . march 4, 2014. review. what is a zaibatsu? how does democracy deal with

HK under Japanese Occupation - . 1. i would like to attack from the new territories. it was because hk was safety from

Haiti under French Rule - . haiti before and during the haitian revolution. haiti’s origins. known as saint domingue

Culture under British Rule - . population of the new british colony. understand that the canadiens were a large majority