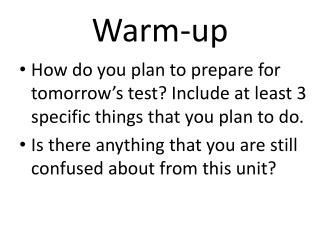 Warm-up. How do you plan to prepare for tomorrow’s test? Include at least 3 specific things that you plan to do . Is there anything that you are still confused about from this unit?. Test Review. Chapters 1 and 2. What do you need to know?. Latitude and Longitude Time Zones