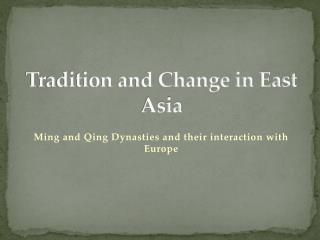 Tradition and Change in East Asia Tradition and Change in East Asia. Ming and Qing Dynasties and their interaction with Europe. The rise of the Ming. Mongols in decline with the death of Kublai Khan, finally overthrown in 1368. Massive peasant (Red Turban) rebellion led by Hongwu (Zhu Yuanzhang)

Tradition and Change in East Asia

Ch. 9: The Expansion of Trade &amp; Religion in South and Southeast Asia – Part 1 - . questions. what was the silk

Chapter 27: Traditions &amp; Change in East Asia - . the quest for political stability. the ming dynasty they

Seeking asylum in Germany - Germany struggles, along with the rest of the eu, to cope with the growing numbers of