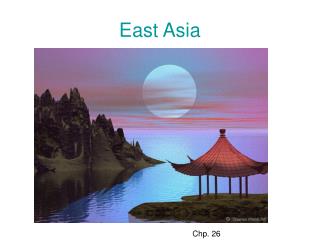 East Asia. Chp. 26. Mountains rugged highlands and deserts cover much of the area. The Mountains cause the deserts. Many of the islands were formed by volcanoes. In China, only 11% of the land can be used for growing crops. East Asia - By: kyle mckenney julian palmer 10-22-10. east asia. how did they change and how did they adapt to a changing

East Asia - . china. for centuries china stood as a leading civilization, outpacing the rest of the world in the arts and

East Asia - . china acts as a cultural hearth in east asia. most of the region’s nations have, at one time, been