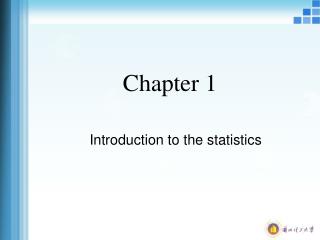 Chapter 1. Introduction to the statistics. Chapter One. What is Statistics?. GOALS When you have completed this chapter, you will be able to:. ONE Understand why we study statistics. TWO Explain what is meant by descriptive statistics and inferential statistics. THREE