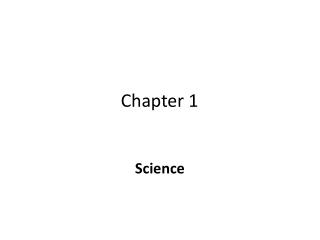 Chapter 1 . Science. Science. - concerned with making sense of the environment and what goes on around you. Concepts –mental image of tangible (blood, rocks, etc…) or intangible objects (motion, velocity, acceleration, etc…). Describing Properties of an Object. Properties – characteristics