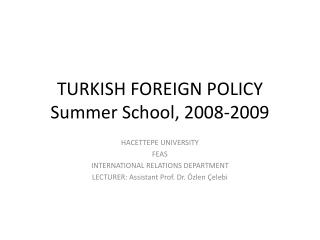 Harvard Summer School 2009 - . international business: context and strategies. what possibilities exist for someone with

2008-2009 School Grade - . add your own data/celebrate. celebrating our success. success. why. next steps. vision and

Foreign Policy - . a nation’s plans for dealing with other countries. basic questions. are we the world’s policeman?

Foreign Policy - . ch. 17. stephanow, 2009. foreign policy: what is that?. everything a nation says and does in world

Foreign Policy - . hook and spanier’s framework. thus far…. the first section of this course dealt with the major