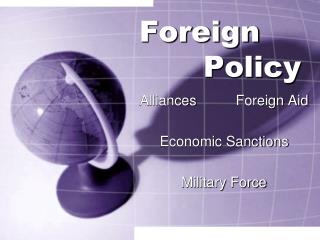 FOREIGN DEBT &amp; FOREIGN INVESTMENT - . foreign debt. foreign debt may be defined as the amount of money that a

Foreign Exchange - . exchange rate = relative price of currencies. video: down and out dollar. exports and imports. us

Foreign Policy - . definitions. foreign policy is the goals the us wants to achieve in the world, along with the

FOREIGN AFFAIRS - . isolationism to internationalism. for more than 150 years, the american people were chiefly

Foreign Affairs - . bell ringer . objective: same homework: answer: do you think the united states has a obligation to

Foreign Finance - . foreign finance - inflows of financial capital into a country, which appear as credits in the