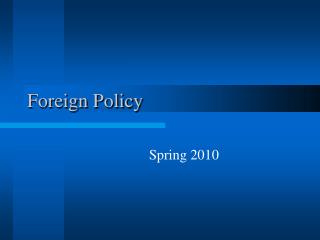 Foreign Policy. Spring 2010. Neoconservative Transformers (Bush 43 adm) US enforces rules on other countries altho not necessarily abides by them, because it is sole unchallenged superpower US #1 military force and should not be reluctant to use it

US Foreign Policy in the late 1800s and 1900s - . new unit. essential vocabulary. foreign policy- the set of goals,

Presidents and Foreign Policy and National Security - . by the constitution: has specific powers that make the office

Chapter 5 National Interest and Foreign Policy - . to what extent should we embrace nationalism?. how has foreign policy