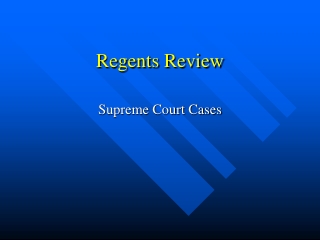 Regents Review. Supreme Court Cases. Plessy v. Ferguson 1896. Background. On June 7, 1892, a 30 year old black shoemaker named Plessy was jailed for sitting in the “White” car on the Louisiana Railroad train. He was only 1/8 black, but under Louisiana law he was considered black. Regents Review - . what you should know!!!. what to expect…. 50 multiple choice questions thematic essay dbq questions

Regents Review - . day 4 unit 7: genetics unit 8: dna to proteins. if organisms mate, parents will each pass 50% of the

Regents Review - . with mr. megna. absolutism. a system of government where a ruler has compete control over the lives

Regents Review - . part ii: ad 600-1450. china. china was the most advanced and powerful civilization of this time

Regents Review - . a racecar initially traveling at 55 m/s applies the breaks and comes to a stop in 2.2 s. a. what is