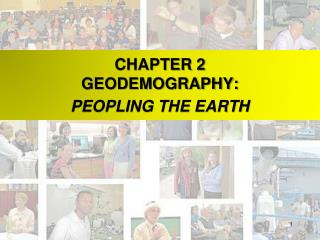 CHAPTER 2 GEODEMOGRAPHY: PEOPLING THE EARTH. Definition: Demography. Statistical analysis of human population Spatial Density Humans are quite unevenly distributed over the Earth’s surface Population densities range from zero to over 2,000 people per square mile. What is studied?.