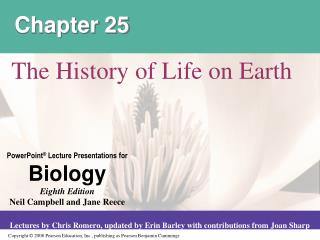 Chapter 25. The History of Life on Earth. Overview: Lost Worlds. Past organisms were very different from those now alive The fossil record shows macroevolutionary changes over large time scales including The emergence of terrestrial vertebrates The origin of photosynthesis