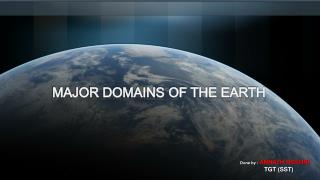 MAJOR DOMAINS OF THE EARTH. Done by : ANNATH ROSHNI TGT (SST). THE EARTH…. WHERE TO START. The earth is the only planet which has life. Human beings can live here because the life sustaining elements of land, water and air are present on the earth. The Domains of Learning - Taxonomies of complexity in different areas. the domains of learning. facts concepts rules

THE DOMAINS OF LIFE - . compare/contrast the “old” system of organizing animals into kingdoms and the new system that

Aim: What are the major parts and characteristics of Earth? - . do now: now you know what density is, put the following

Domains - . the 3 domains are archaea , eubacteria and eukaryota ( eukarya ) each domain includes 1 or more kingdoms

By: Karl Philippoff Major: Earth Sciences - The carbon cycle: acceleration of global warming due to carbon-cycle

Domains - . in short. a domain name is a unique name that identifies a website. it can consist of letters, numbers, and