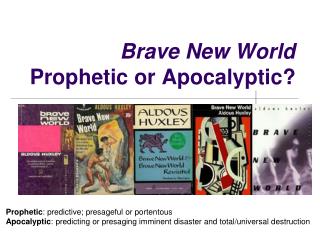 Brave New World Prophetic or Apocalyptic?. Prophetic : predictive; presageful or portentous Apocalyptic : predicting or presaging imminent disaster and total/universal destruction. A collision of cultures to shake our beliefs as readers.

Evangeline A Tale of Acadie - . henry wadsworth longfellow. introductory this is the forest primeval. the murmuring pines