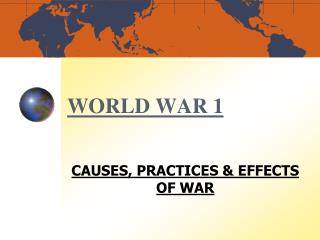 WORLD WAR 1. CAUSES, PRACTICES & EFFECTS OF WAR. The World before World War I. The War was also known as THE FIRST WORLD WAR, THE GREAT WAR and famously “ THE WAR TO END ALL WARS” It was a global military conflict that took place mainly in Europe between 1914 & 1918.