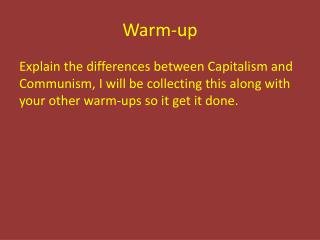 Warm-up . Explain the differences between Capitalism and Communism, I will be collecting this along with your other warm-ups so it get it done. Warm-up. Define the following terms Cold War. Yalta Conference Potsdam Conference Iron Curtain Containment Domino Theory Truman Doctrine .