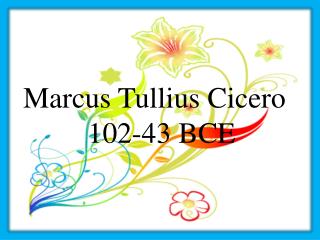 Cicero - . an introduction. his life. born on 3 rd january 106bc in arpinum first of two sons educated in

Cicero - . upul abeyrathne , dept. of economics, university of ruhuna , matara. background. there is no systematic work

Cicero - . marcus tillius. by hallie mills. born at aspinum on january 3 rd of the year 106 b.c. moved to rome at an

Cicero: A Conclusion - . let’s review: career. born in 106 bc advanced through cursus honorum – a novus homo 80 bc

Cicero and Seneca - . introduction. cicero and seneca wrote during the period of the roman empire. the romans had

Aristotle and Cicero - . 30 july 2008. regimes where the ruler rules in the common interest monarchy aristocracy polity.

Cicero, in Verrem 2.1.53 69 - Agenda:. how important was the set passage in the trial of verres overall?what are some of