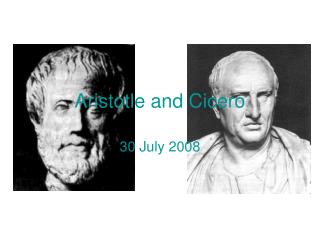 Cicero - . an introduction. his life. born on 3 rd january 106bc in arpinum first of two sons educated in

Cicero and Seneca - . introduction. cicero and seneca wrote during the period of the roman empire. the romans had

Cicero - . upul abeyrathne , dept. of economics, university of ruhuna , matara. background. there is no systematic work

Cicero - . marcus tillius. by hallie mills. born at aspinum on january 3 rd of the year 106 b.c. moved to rome at an

Aristotle and Augustine - The old giants. aristotle and augustine. he was very important to the medieval church. he is

Aristotle - . 4 th century bc. aristotle &amp; socrates can you guess who is who and why?. aristotle. aristotle’s