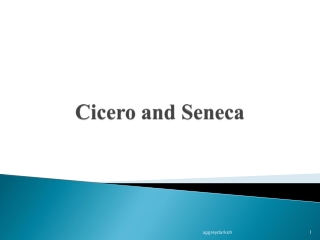 Cicero and Seneca. Introduction. Cicero and Seneca wrote during the period of the Roman Empire. The Romans had just begun to consolidate their rule. They sought to define citizenship and identify the rights and duties of citizens. William Shakespeare 1564-1616 - . the “be-all and end-all” of dramatists. childhood. born in stratford-upon-avon son

Reformers - . immigrants. push factor reasons that forced people out of their native land and to a new world. pull

The Seneca Falls Convention - . by: cameron schepner. the seneca falls convention was a meeting of about three hundred

Cicero’s Speech - . q: what kind of government did they have in the era of the roman republic? a: a republic ( res

Focus Questions for “OCTAVIAN LEADS” Why was Cicero killed? - How did octavian assure the loyalty of the army? name