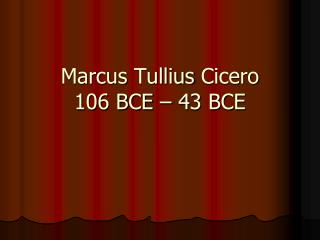 REVIEW OF EMERGENCY SERVICES IN THE TOWN OF CICERO, NY - The assignment. in january 2008 cicero town supervisor chet

BOLAHUN READS - . a room without books is like a body without a soul- marcus tullius cicero. high school students in

Marcus Garvey - . “africa for the africans”. “liberate the minds of men and ultimately you will liberate the bodies

Cicero Translations Presenting you to the world - . here are the answers to our quiz. we hope you enjoyed it. feel free