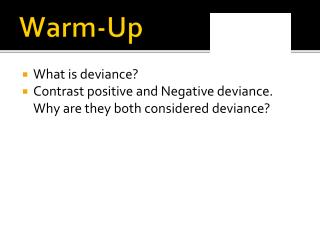 Warm-Up. What is deviance? Contrast positive and Negative deviance. Why are they both considered deviance?. Social Control. All societies have ways to promote order, stability, and predictability in social life. Social controls are the ways in which societies promote conformity to norms.