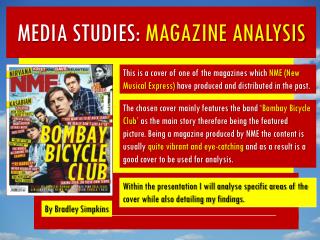 This is a cover of one of the magazines which NME (New Musical Express) have produced and distributed in the past. MEDIA STUDIES: MAGAZINE ANALYSIS. Arrow Sudoku - . or sudokarrow if you read the saturday i purchase arrow sudoku magazine from clarity media here:

The Newcastle-Ottawa Scale (NOS) for Assessing the Quality of Nonrandomized Studies in Meta-Analysis - . g. wells, b.

CD and DVD Media - . chapter 10. overview. in this chapter, you will learn to identify variations of cd media technology