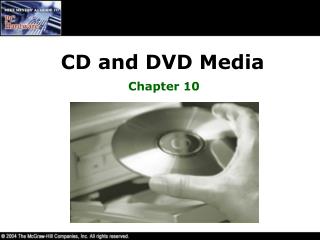 CD and DVD - . how cd and dvd works by: mark jiang. history of the compact disk. compact disk (cd) started in the

DVD and CD Repair - . dvd and cd troubleshooting (common problems and basic diagnostic tips). the most basic and

Data Archiving on Recordable CD and DVD Media - . archive grade media – how long should it last? what makes it