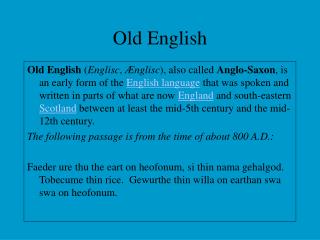 Old English. Old English ( Englisc , Ænglisc ), also called Anglo-Saxon , is an early form of the English language that was spoken and written in parts of what are now England and south-eastern Scotland between at least the mid-5th century and the mid-12th century.