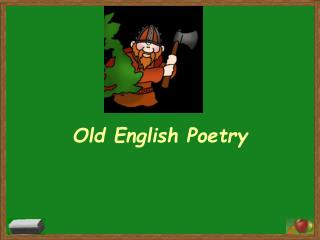 Old English Poetry. The Old English world centered around the chieftain, the king ( cynning ). His kinsmen would be noblemen, thegns or thanes, also called eorl s. Ordinary people of no rank at all would be ceorl s. There were also slaves. Elements of Old English Heroic Culture and Poetry - . a heroic poem celebrates the exploits of a great warrior whose

POETRY NEW AND OLD - . learning by discovery created by ann porter and tina kerr. teams. teams will be comprised of three

Poetry – English 9 - . tp-castt method to interpret poetry. tp-castt. does poetry puzzle you? do you ask yourself the

English Renaissance Poetry: - . sonnets. background. invented by francesco petrarch inspired by his unrequited love for a