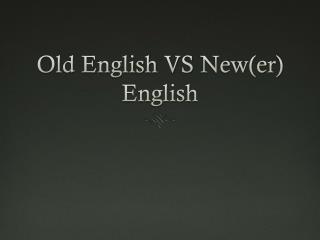 Old English VS New(er ) English . Shakespeare’s Language IS:. Complex and often hard to decipher Full of words and phrases that seem alien to us or now have completely different meanings (marry=indeed, ho=hey! Soft=hold/wait a minute) “Old Money” vs. “New Money” - . by: miss cara cleek. in regards to wealth, two classifications have been

“The Old” vs. “The New” - . advances in technology allow for numerous electronic products to become smaller in