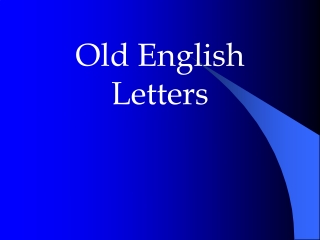 Old English Letters. Historians say that there is not much difference between the language used in Old English compared to the English that we speak today. pe cildra biddap þe, eala lareop, þ Þu tæce us sprechan forþam unζelærede.

Some Old English and Middle English letters - . þ, ð. used in handwriting until late in the 15th century: oe þæt,

CAPITAL letters in English - . capital letters we use capital (big) letters at the beginning of the following kinds of