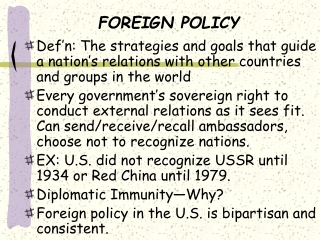 FOREIGN POLICY. Def’n: The strategies and goals that guide a nation’s relations with other countries and groups in the world Every government’s sovereign right to conduct external relations as it sees fit. Can send/receive/recall ambassadors, choose not to recognize nations.