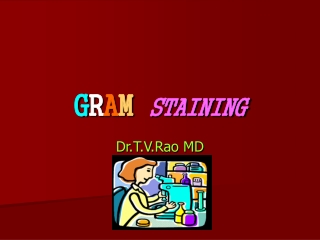 Gram staining - . gram stain kits is used to stain microorganisms from cultures and specimens by the differential gram

Gram Staining Discussion - . may 27, 2011. let’s practice!. use the sheets given to you and complete a gram stain on

Gram Stain Lab - . purpose : use procedure to identify if bacteria is gram positive or gram negative. this would help

STAINS AND STAINING TECHNIQUES - . by samuel aguazim(md). why we should be stain bacteria :

The Gram Stain - . the gram stain. in the late 1800’s, christian gram observed that some genera of bacteria retained a