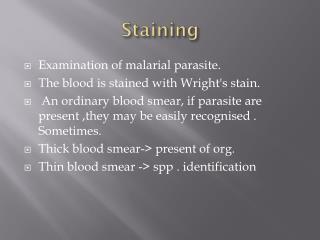 STAINING - . the process of adding a dye to a bacterial culture. dyes. basic dye—possess a positive charge acidic

Staining - . dr. tarek atia. a. decalcification. bone specimens as well as calcified tissues are the most type

Phospho Staining - . the experiment mainly focuses on the staining of proteins which are phosphorylated during the post