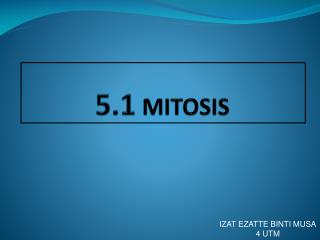 5.1 MITOSIS. IZAT EZATTE BINTI MUSA 4 UTM. THE NECESSITY FOR THE REPRODUCTION OF NEW CELLS ORGANISMS. Mitosis is the process of cell division that produces two daughter cells which are genetically to each other and to their parent cell. The significance of mitosis in living things: Mr. Nielsen - . daniel.nielsen@blackgold.ca 929 6282 this covers up to mitosis and meiosis in topic 5. your personal

Cell Cycle and Mitosis - . ap biology unit 3. cell cycle. cell cycle = the entire cycle of a cell from one division to

Cell Cycle and Mitosis - . chromosomes. genetic information is passed from one generation to the next on chromosomes .

Cell Cycle and Mitosis - . why do cells divide?. for repair of cells in case of an injury growth and development produce