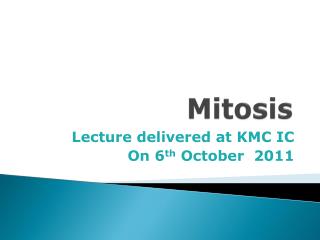 Mr. Nielsen - . daniel.nielsen@blackgold.ca 929 6282 this covers up to mitosis and meiosis in topic 5. your personal

Meiosis and Mitosis - . what is mitosis for?. 1. reproduction in favorable conditions. 2. growth and development 3.