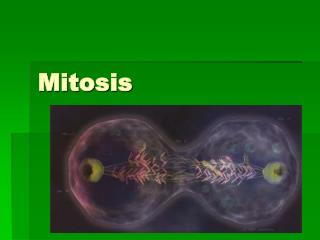 Mitosis. Why Mitosis?. The purpose of mitosis is to generate two new cells from one cell. The “daughter cells” generated are exact copies of the “parent cell” Mitosis is happening in many cells in your body as we speak! Some cells divide more frequently than others. Mitosis. Cytokinesis.