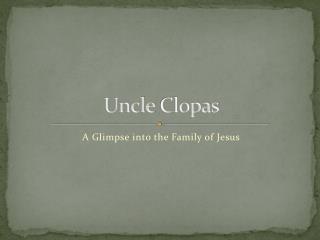 Uncle Clopas. A Glimpse into the Family of Jesus. Matthew 13:55. Uncle Jed’s Barbershop - . by margaree king mitchell. wednesday, january 13, 2010. sign up on the board if you are

Uncle Jed’s Barbershop - . by margaree king mitchell illustrated by james ransome. introduction. have you ever gotten

My Uncle Rhett - . by kristen hallie singleton. my uncle rhett was the kindest person you could ever know. he was nice to