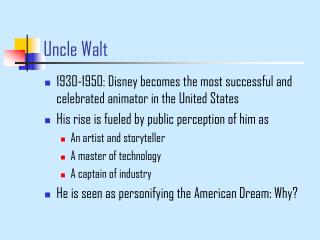 Uncle Walt 1930-1950: Disney becomes the most successful and celebrated animator in the United States His rise is fueled by public perception of him as An artist and storyteller A master of technology A captain of industry He is seen as personifying the American Dream: Why?

WALT - . understand the 5 p’s of production. know &amp; understand economies of scale in relation to bsb. know and

WALT - . to identify the factors that effect diffusion rates to state fick’s law that facilitated diffusion is a

WALT - . partition order round whole numbers and decimals with up to 2 d.p. partitioning. every number sits in it’s own

WALT - . able to explain what globalisation is and can give examples of global business activities. know the

WALT: - . to recognise and extend number sequences. what are the missing numbers in this sequence? how do you know?. 58,