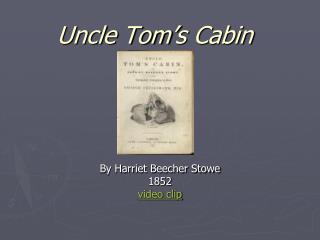 Cabin in the Woods Campaign Museums of Mississauga - . at one point in time, the log cabin was the most common building

Anti-Abolitionist image - Sentimental novel: a novel based on a biased opinion that expresses emotion as more important

ME and UNCLE ROMIE - . lindac / callison /2011. me and uncle romie is claire hartfield’s only book. illustrator jerome

Family - . created by tonya stokes. my mom. my sister. my dad. my sister’s wedding. my grandma. my granny. my grandpa.

Causes of the Civil War - . connect these…. pmq #4, 5: transportation and agriculture and commerce and sectionalism

Thoreau Statue and model cabin - . cairn at site of thoreau cabin. marking the foundation of thoreau’s cabin. view from