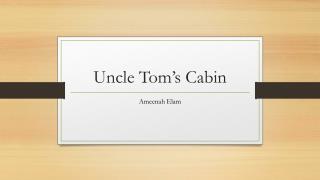 Uncle Tom’s Cabin. Ameenah Elam. Slavery. The North- somewhat for slavery South- completely for slavery No one challenged that. About Stowe. Grew up with “a prominent family of preachers” witnessed several “runaway slave” incidents Encouraged her to write UTC Cabin in the Woods Campaign Museums of Mississauga - . at one point in time, the log cabin was the most common building

Anti-Abolitionist image - Sentimental novel: a novel based on a biased opinion that expresses emotion as more important

Causes of the Civil War - . connect these…. pmq #4, 5: transportation and agriculture and commerce and sectionalism

Thoreau Statue and model cabin - . cairn at site of thoreau cabin. marking the foundation of thoreau’s cabin. view from