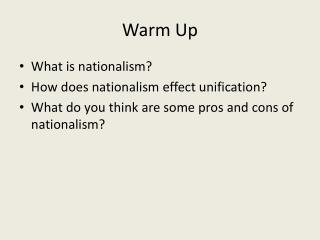 Warm Up. What is nationalism? How does nationalism effect unification? What do you think are some pros and cons of nationalism?. Unit 8: Unification & Politics of the 19 th Century (1815-1914). Germany Before Unification. 39 States: The German Confederation Two dominant states