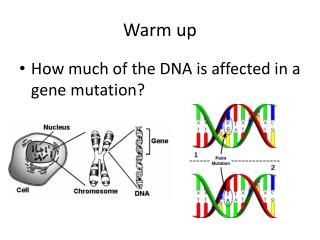 Warm up. How much of the DNA is affected in a gene mutation?. Karyotypes & Chromosome Mutations. Karyotypes Photograph of an individual’s chromosomes Human karyotypes show 23 pairs of homologous chromosomes . 46 chromosomes or 23 pairs. Sex Determination