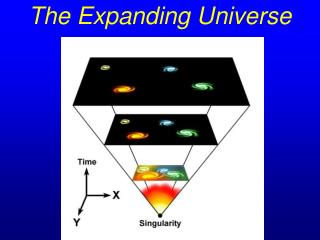 The Expanding Universe. Discovery of Expansion. 1929 : Edwin Hubble measured the distances to 25 galaxies: Compared distances and recession velocities Calculated recession velocity by assuming the redshift of spectral lines is due to the Doppler Effect Discovered :

CHEMISTRY OF THE ELEMENTS - . e lements in the u niverse and the w orld. scientists believe that the universe began

The Expanding Universe - . except for a few nearby galaxies (like andromeda), all the galaxies are seen to be moving away

Evidence for an Expanding Universe with a Finite Beginning - . 11.16.09. hubble’s observations. first to show that

THE YOUNG UNIVERSE John K. Webb University of New South Wales Sydney, Australia - . part 1 why do we think the universe

The Universe - . the universe is the sum of all matter and energy that exists, that has ever existed, or that ever will

EXPANDING UNIVERSE - . olbers paradox. “the night sky is dark.” this statement is called olbers ’ paradox , after

P1 The Earth in the Universe - . key facts. the universe is 14,000 million years old the universe possibly started with a