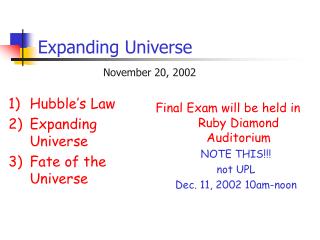 Expanding the Talent Pool: Recruitment and Careers - . the challenges of human resources management. strategic aspects of

Big Bang Theory - . origins of the universe. a-b-c. which of the following are used as evidence for big bang theory?

Thermochemistry - . heat. energy transferred between two objects as a result of the temperature difference between them.

God and the Multiverse - . november 4, 2012. a universe with a beginning. introduction sessions. nov 4: introduction. a

Which of the following people did NOT accept a heliocentric model for the universe? - . kepler copernicus tycho galileo

Observing the Universe for Yourself - . patterns in the night sky. our goals for learning:. what does the universe look

Expanding the Family Circle - . expanding the family circle. module i. welcome. before the training begins…. have you

Measuring the Universe: Earth - Eratosthenes (about 200 bc): sun overhead at syene on summer solstice sun 7 º from