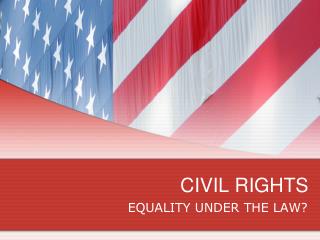 CIVIL RIGHTS. EQUALITY UNDER THE LAW?. CONCEPTS of EQUALITY. Equality of Opportunity People should have an equal chance to develop their talents Effort and ability should be rewarded equally Levels the playing field Recruiting specific race, gender so everyone has same chance starting out.