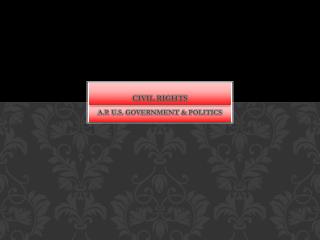 Civil Rights. A.P. U.S. Government & Politics. What are civil rights?. The privileges and rights guaranteed to an individual and are protected from limitation by government actions (laws) Guaranteed by the Equal Protection Clause in the 14 th Amendment. Historically.