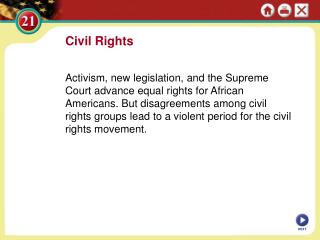 Civil Rights. Activism, new legislation, and the Supreme Court advance equal rights for African Americans. But disagreements among civil rights groups lead to a violent period for the civil rights movement. NEXT. Taking on Segregation. SECTION 1. SECTION 2. The Triumphs of a Crusade.