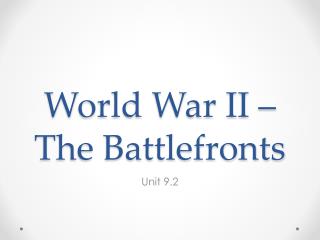 World War II – The Battlefronts. Unit 9.2. Two Wars. European Theater. Pacific Theater. When the U.S. got involved in Dec. 1941, Germany controlled most of Europe. In the Pacific it was largely the U.S. challenging Japan. Military Leaders to Know.